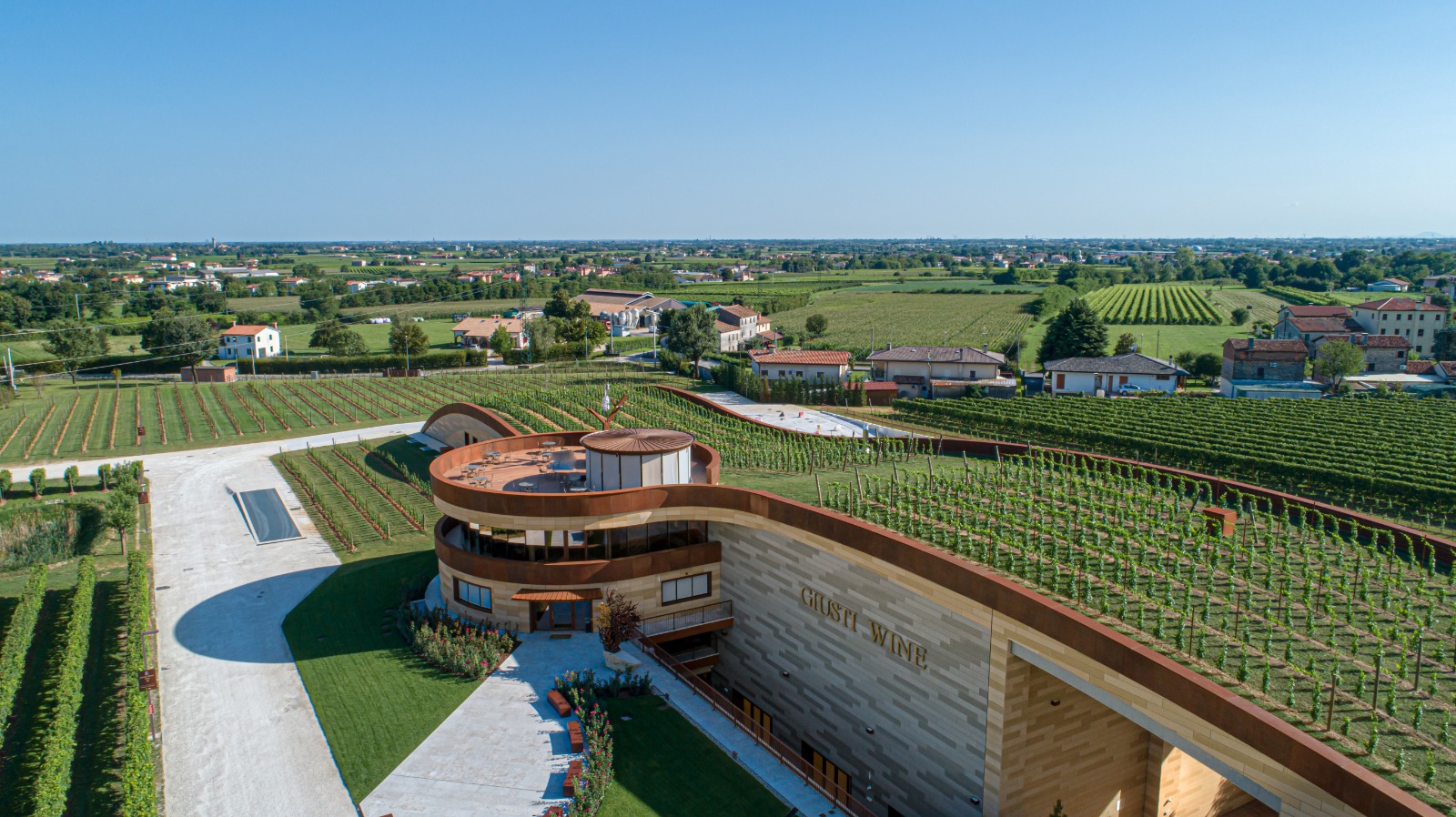 The Giusti-Dal Col estate, known to the world as Giusti Wine, was established in 2003 by its owner Ermenegildo Giusti who considers Prosecco with the DOC and DOCG designations a product that draws attention to the Veneto region

After emigrating to Canada Mr Giusti had set up his own company by the time he was 40, his core business being building and large infrastructure projects. He travelled to all four corners of the globe, learning to appreciate wines on all the continents and recognising the quality and renown of French wines. The experience gave him an inkling of what Italian wines needed to gain their rightful place on the world market. He invested a considerable part of his revenue from his Canadian activities in this project and started to purchase the first plots of land on the eastern side of the Montello area, in the Treviso March, as well as at the foot of that same hill where, on the vineyard “Tenuta Rolando”, he built the administrative headquarters of the Wine Estate in 2013. Today the Estate has approximately 100 hectares of land, 70% of which is already planted with vines, divided into ten TENUTE or vineyards as follows: Tenuta Case Bianche, Tenuta Rosalia, Tenuta Rolando, Tenuta Sienna, Tenuta Abbazia, Tenuta Aria Valentina, Tenuta Emily, Tenuta Ava, Tenuta Amelia and Tenuta Maria Vittoria. The purchase of land and subsequent redevelopment of the Tenute will continue and should be finished by 2017. The construction of the Winery, the place where the grapes are amassed and transformed, is last part of the general project that began with the purchase of the agricultural land. With the estate processing its own grapes it means that the whole supply line and transformation process can be controlled so that the QUALITY of the product is guaranteed, which is both basis and target of the Giusti Wine project. The new winery will be built on the Tenuta Sienna vineyard, in that “strip” of land that joins the foot of the eastern part of the Montello area with the Po Valley and which extends as far as Venice. Building the winery is a challenge because the area is both listed as one of outstanding natural beauty and because it lies no more than 1000 metres as the crow flies from the Abbey of Sant' Eustachio - a Romanesque building dating back to the year 1000, which was destroyed at the end of the First World War and whose remains attract many foreign tourists. 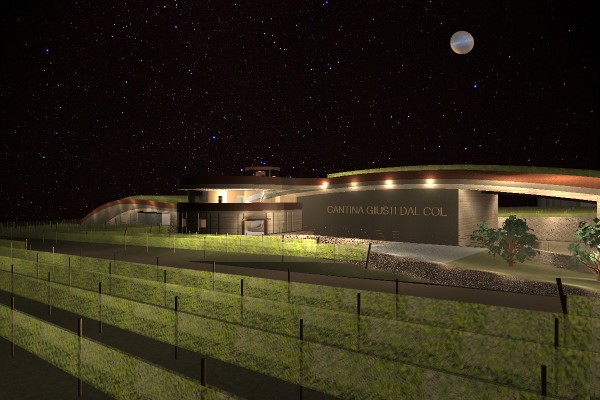 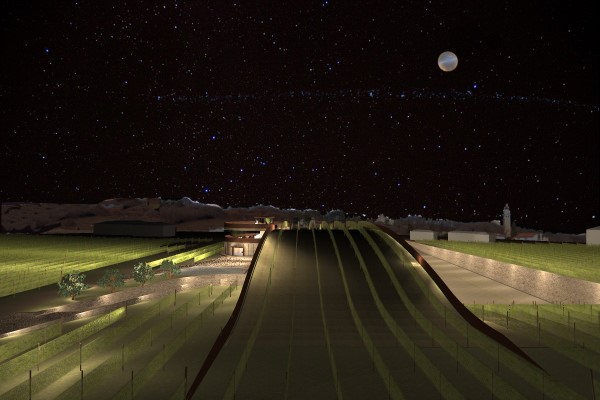 The project in essence revolves around the presence and shape of the Montello hill, abounding in history stretching from the period of the Roman Empire to the Great War and governed by the Venetian Republic for four centuries (from XV to XVIII), which used it as a resource while also ruling and protecting it. The elongated, undulating zoomorphic shape of the new building will be hardly visible at the foot of the Montello, which cannot be “encroached upon” by a volume that hides any part of it. That is why it was decided to have two thirds of the winery underground, while the part above ground is in complete harmony with its surroundings. The underground construction will be covered by the existing rows of vines. The result is that the two distinctive undulating curves of the “new Architecture” profile seem to be the work of NATURE, which has delicately raised the ground in two points to create the necessary space for processing the fruit (grapes) that the same land produces. The end product, in other words the bottles of Prosecco or Rosso del Montello (Umberto I), will be sold worldwide, helping to promote this region that is a gem not only of the Trevisan March (which in the 14th century Dante defined as “Joyous and Amorous”), but of the whole of ITALY. For visitors or anyone wishing to access the Montello from Via Moretti or Via Arditi, the new building will seem like a natural movement of the land and will in no way detract from the breath-taking view over the Montello, with its many species of trees offering a myriad of colours. The same principle led to the decision to place the entrance to the offices on the east and not the west side where the view, rather than opening onto the public roads, looks directly onto the “Barchessa” of Tenuta Abbazia1. It is intended that the latter will host grand receptions and tastings for national and international guests, who, helped by being at a slightly higher altitude and only 600 m as the crow flies from the new winery, will first of all be able to see this new “Architecture of the Earth” arise and then enjoy its graceful shapes that seem a natural movement of the surrounding land. Viewing the building from that privileged position will undoubtedly be an added value for visitors and tourists, who will inevitably be enticed into also visiting the winery. The “core of the building” is rectangular in plan, measuring approximately 100x25 m (winery) and has two floor levels for a total surface area of roughly 4000 square metres in addition to a panoramic viewpoint on top, which leads to the vineyards and from where there is a splendid view of the Montello hill. Running from south to north inside the building are the different areas where the processing is carried out; it starts with the area for receiving the grapes, followed by crushing and pressing of the grapes, collection of the stalks and conveying of the musts to large steel containers where they undergo the subsequent winemaking processes, finishing with the bottling department with relative appropriate services and support laboratories. Lastly, the bottles placed on pallets are transferred to the upper floor by goods hoist and taken to the finished product store ready for final loading to take them to their destination. The office block measuring approx. 300 m2 lies to the east and is circular in plan with a spiral staircase at the centre, which rises from a level of 7.70 m below ground to 6.70 m above ground passing through all five levels of the building. Since the new winery will be open to visitors, a specific route for guests has been studied; a tunnel goes around the whole perimeter and has splayed openings on the internal wall through which guests can see inside the various areas. This means that the entire production cycle can be observed without disturbing staff who are working. The route leads to an underground “piazzetta” that is open to the sky yet covered by the overlying vines, decorated with trees, furnished with Corten steel benches and embellished by a sloping water wall; this small “square” can also be used by workers when taking a break. This “architectural promenade” then continues, using the spiral staircase to get to the different levels, from the office floor which offers a first glimpse of the vineyards of Tenuta Sienna, right up to the top which leads into the vineyard overlying the winery and from where there is a 360° view of the surrounding countryside